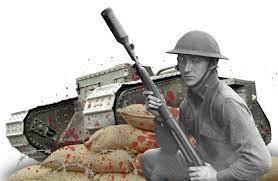 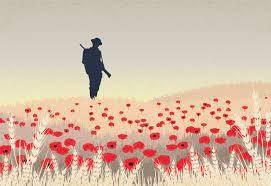 Our term 5 topic is Fallen Fields

The Sun sets on the battlefields of France and solitary bugle sounds the Last Post.

Known as 'the war to end all wars' the First World War was a conflict that had a devastating effect on millions of people across the world.

What started this global tragedy? What was life like for families on the home front as they waited for news of loved ones who were 'missing in action'? How did the soldiers endure the terrible conditions in the trenches? How was a fragile peace finally achieved?

We will always remember the fallen.

In the Fallen Fields project, your child will start by listening to an audio recording of a soldier leaving for war. Using inspiring illustrations, they'll write diary entries from the perspectives of characters affected by the war. They will delve into the causes of the First World War.  Their research skills will help them to find out which countries were the Central Powers, which were the Allied Powers and which were neutral. They will order significant events and decide who were the most influential figures of the First World War. After researching devastating battles, they’ll write short stories from the viewpoints of British soldiers. They will read wartime poetry and examine artwork to pick out evocative imagery and thought-provoking themes. They will also analyse wartime propaganda and reflect on the significance of poppies.

Unfortunately not the ones with chocolate chips.

Some cookies are necessary in order to make this website function correctly. These are set by default and whilst you can block or delete them by changing your browser settings, some functionality such as being able to log in to the website will not work if you do this. The necessary cookies set on this website are as follows:

Cookies that are not necessary to make the website work, but which enable additional functionality, can also be set. By default these cookies are disabled, but you can choose to enable them below: